A large (178 'Entries') collection of bilingual (English/Catalan) poems & prose poems written over a period of two years in Barcelona, Spain. A myriad of voices are employed to explore its days & nights, its streets & back-streets. This is a collage of dreams, fiestas, visions & exhibitions. It is unique in its range, design & stature. 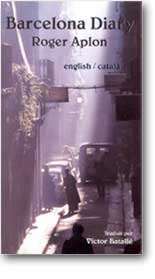 As she strokes her guitar

a shy, young fox, curled in the comfort of her lap, tenderly licks
a rich & ruby wine from her breasts.

There's a hint of a man with green shoes & a taste for needles, signs
of a frail woman culling kittens under her eaves.

Though she rarely abandons hope, a peacock guards her chance advances,
drives wolves & locusts from her womb.

There's a dark streak easing up her back, through her hair & into her eyes.
I've seen these signs before & am sure she must sleep in a hail of bees.

Summer heat wrings out its share of sweat, drains the flower pots
strung like tinted disco dandies from the byways &
balconies of Barrio Gotic &

to stitch a shroud or tablecloth for supper, sharing water with those
hangers-on who toss on cardboard sheets
or goad a lame setter pup

to nip his mangy shepherd bud // Urine / drunk by The Auspicious Lord
Shiva / a cure for hives, heat rash & sore
gums / ignored by these men &

dogs & the passion of the blessed nuns as charity rises with the heat &
one whiff awakens ancient fears of boundaries
set & has us pass with care.

He lay next to her eagerly oiling, in fact, massaging, No! caressing her pliant
breasts as a lover might in the privacy of their special place but here on the
beach in the sun & for me alone like

no one close enough for me to scent or kiss or fondle or chase into the swells
where the gulls are diving & kids are surfing their way back & no one seems
to care whether I've come or not.

There's An Old Man At A Bus Stop

the lady & her poodle   coed with briefcase & helmet   the sun reflecting
passing traffic in the windows of Fincas Forcadell...

He's folded his arms across his chest but is not defiant rather, content &
lost for these few moments...to contemplate his horizon through

clear brown eyes / content to wait for that certain bus which he knows
will be coming soon.

Marc Chagall @ Center Cultural Caixa Catalunya - An Exhibition
"...To me, art is mainly about a condition of [my] soul" M.C.

He's the horned goat in red robes with his Cheshire grin, the trout that
swims above the marriage bed, a chicken chasing a Rabbi home.

He's the violin that plays the funeral, the cow that gives green milk, the
clock that marks our time.

He's the husband & the wife adrift in midair, a Shofar trumpeting Rosh
Hashanah, a loafing Hassid called to prayer.

He's a gambler with his foot in his mouth, a drunkard pissing against the
fence, Jacob battling his angel.

He's Abraham with a knife at Isaac's throat, a lover stroking the skin of
his beloved, Job frozen in despair.

He is, in fact, all that he has gleaned & pressed to his breast & wrestled to
the earth & tamed &... reluctantly released...

They're simply holding hands as the bus moves slowly up Aribau but there's an urgency in them & she leans into him & kisses his eyes one by one & they are deliberate kisses & he pulls her closer & the light is up for his stop & she knows he must leave & she looks away but he pulls her close again & pauses at the door & looks back & they wave to each other & he stands in the street & they wave again & the bus pulls away & she still waves & the bus picks up speed & she keeps waving & looks down the deserted street & back & we are past the next corner & still she waves / like a tried swimmer short staccato strokes of her empty hand.

The big one with the bloody eye belts the little one who runs away but the big one chases him waving his half empty bottle of cheap red wine & drags him back by the scruff of his neck like a chicken to be plucked & the little guy tries to sit quietly but the big one keeps railing at him & swatting his head for emphasis & someone goes for the cops who are in the station at the side of the plaza but they refuse to join in & merely watch from their little window & someone else tries to separate the two but the big one yells & spits & takes a swing at him & falls in the street where he belches & farts & when he can stand he digs out his limp dick from his stained jeans & tries to spray the crowd but instead pisses a short thin stream mostly down his leg & when he sees his partner has disappeared he starts off too with his open pants screaming at the top of his voice that we are all ass-holes & sons-of-bitches & no doubt some of us are & other choice Catalan insults which I cannot understand but some do & applaud & cheer & he turns & flicks his tongue & a dog barks at his heels & he tries to run but keeps tripping over his trouser cuffs & falls again & sits in his own dim light & stares off down the street & hangs his head & weeps.

pay later...& the woman who sweeps in her orange jump-suit & whistles
& smokes cigars & Nuria who runs the photo lab & will give you a gift

the rest will cut you off on the stair or at the counter or through the door &
when you offer a seat on a crowded bus...will smile &

decline & don't wonder & don't object . . . they have a plan & share the
rules but not with you...especially

if you're a man & suspect & haven't declared which side you're on or what
you will bring to the part or contribute at home...